The Environmental Movement’s Most Published and Least Acknowledged Author

“You girls, bein’ tender-hearted an’ not knowin’ the life of the forest…think it was a pity the poor deer was killed by a murderous lion. But you’re wrong. As I told you, the lion is absolutely necessary to the health an’ joy of wild life…When deer were created…then the lion must have come, too. They can’t live without each other…Well now, if left alone deer would multiply very fast. In a few years there would be hundreds where now there’s only one. An’ in time, as the generations passed, they’d lose the fear, the alertness, the speed an’ strength, the eternal vigilance that is love of life…they’d lose all that an’ begin to deteriorate, an’ disease would carry them off…But if it wasn’t for the lions, the deer would not thrive. Only the strongest an’ swiftest survive. That is the meanin’ of nature. There is always a perfect balance kept by nature.” (Man of the Forest)

So who wrote these words? They certainly don’t sound like anything environmental luminaries Aldo Leopold, John Muir, Rachael Carson or Henry David Thoreau would write. Wallace Stegner and Edward Abbey might be good guesses since they wrote great works of fiction, but it doesn’t sound like their style of writing either. The truth is that they were penned by a dentist whose combined works sold more than the aforementioned icons of environmentalism combined. Here’s a hint. This author wrote during the early days of America’s conservation movement with his most successful works published between 1910 and 1940. Let’s see if this description of a novel’s hero, a forest ranger, will help you nail down the author.

“Thad Eburne had sacrificed himself to the cause of … conservation… His very love of the wild animals, his antagonism to the killing of even wolves, wildcats, and especially cougars, had incurred the enmity of those above him in the service. Besides that he had fought the building of roads and the overtures of lumbering and mining men who would have exploited the beautiful preserve for their greedy ends. There were cattlemen, too, who hated Eburne for sternly holding them to their prescribed gazing permits. Graft had not worked with this ranger, and men of little brief authority found him a hard nut to crack.” (The Deer Stalker)

If you still haven’t made the connection, read the following excerpt about the slaughter of the American Bison from one of the author’s most famous novels and perhaps you will solve the our little mystery.

Early on the ninth morning of that long journey Tom and Stronghand forded the Pease River…and entered the zone of slaughter. No live buffalo were in sight, but the carcasses left by the advancing hunters polluted the summer air and made the prairie a hideous shambles. They passed thousands and thousands of bone piles and rotten carcasses…Coyotes in droves, like wild dogs, fought along the road… Indeed, many of them were so gorged that they could not run… The wake of the hide-hunters was something to sicken the heart of the stoutest man and bring him face to face with an awful sacrifice.” (The Thundering Herd) 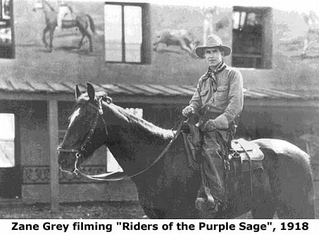 If you are over 40, there’s a good change you will have identified the author as Pearl “Zane” Grey. Sadly, if you are under 30, there is a good chance the name Zane Grey doesn’t ring a bell at all. When he died in 1939, Grey’s long time publisher, Harper and Brothers Publishing, estimated their sales of his books at 17,000,000 and stated, “In sales, Zane Grey is exceeded only by the Bible and the Boy Scout Handbook.” He wrote 57 novels about the Old West and 10 Western non-fiction books. These books were the inspiration for 130 movies. In addition, most of his novels appeared as serials in the most popular magazines of his time. Zane Grey is credited with almost single-handedly creating the world’s image of the American West. Critics through the years downplayed his writing because Grey typically used recurring themes of sappy romances between stereotyped heroes and heroines. However, his images of Western forest and desert ecosystems are faithful to the wild places he loved.

There is little doubt that the popularity of Grey’s novels, supplemented the efforts of conservationists such as Teddy Roosevelt, Gifford Pinchot, and John Muir as they successfully advocated for the federal government to play a proactive role in protecting public lands. In today’s eco-political environment, Grey’s multiple use beliefs would likely be denounced by members of wilderness coalitions. While he condemned commercial exploitation of natural resources, he strongly supported management practices that assured a sustainable yield, largely for the use of local ranchers and communities. However, Grey needs to be judged within the context of his time.

Grey’s novels condemned commercial fisheries, clear cut logging operations, overzealous predator control, and the cruelty of large scale mustang wrangling. His writing also mourned the interconnected genocide of the Native Americans and the American Bison. Grey was one of the first, and almost assuredly the most widely read, novelists to educate readers regarding the importance of ecological balance.

Recognized as his era’s greatest outdoorsman, Zane Grey and his environmental convictions extended beyond his books and articles. For example, he saw the fishing grounds off California being depleted of “countless millions” of kingfish, mackerel, sea bass, yellowtail, albacore and blue fine tuna by Japanese net-boats, and he lobbied for laws to resolve the problem. He spoke about against the Colorado River Project’s plan to build dams and produce hydroelectric power. Grey was also a founding member and benefactor of the Isaac Walton League. For years he donated articles to the League’s magazine “Outdoor America” at a time when other magazines paid $2,500 or more for Grey’s articles.

My personal connection with Zane Grey has grown since my early teens when cowboys, Indians, and ladies in distress warmed my adolescent blood. I reconnected with Grey when I moved to Kanab five years ago and walked in the author’s footsteps at places like the North Rim of the Grand Canyon, Lee’s Ferry, House Rock Valley, Pipe Springs, and the Kaiparowits Plateau. My wife bought me all 57 Zane Grey novels of the Old West which I devoured over the following year. I rejoiced in his connection with the wildlife and landscape more than the stories themselves. I encourage anyone interested in reading Grey’s novels for a similar reason to consider the following selections.

For more information on Zane Grey and his values, the comprehensive resource on this topic is Zane Grey: A Study in Values- Above and Beyond the West by Charles G. Pfeiffer.

Ed Meyer ran Utah’s rural economic development programs for five governors before retiring to Kanab, Utah, where he is now a city councilman. In his spare time, Meyer’s passion is researching Zane Grey and his relationships in Utah. He and his wife Kathy enjoy camping on Grand Canyon’s North Rim.

Torrey House Press is an independent nonprofit publisher promoting environmental conservation through literature.   We believe that culture is changed through conversation and that lively contemporary literature is the cutting edge of social change. By building and engaging community in the conversation of conservation, we make our contribution to, as Wallace Stegner hoped for, a “society to match the scenery." THP books are distributed by Consortium Books Sales and Distribution, a subsidiary of Ingram Content Group.
View all posts by Torrey House Press →
This entry was posted in Plateau Palaver and tagged Ed Meyer, Zane Grey. Bookmark the permalink.