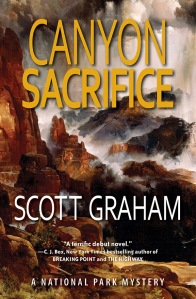 In Tony Hillerman fashion, this page-turner brings the rugged western landscape, the mysterious past of the ancient Anasazi Indians, and the Southwest’s ongoing cultural fissures vividly to life. A deadly struggle against murderous kidnappers in Grand Canyon National Park forces archaeologist Chuck Bender to face up to his past as he realizes every parents’ worst nightmare: a missing child.

Each book in Scott Graham’s National Park Mystery Series takes place in a US national park. The next book in the series will be available in spring 2015 and take place in Rocky Mountain National Park (titled Mountain Rampage) followed by a mystery set in Yellowstone National Park and later Yosemite National Park. Mystery-lovers will experience the breathtaking wild places of the US—and the thrill of a riveting story unfolding in iconic, often familiar, landscapes.

Scott Graham has explored the Grand Canyon all his life. He has backpacked into the canyon’s farthest reaches, and rowed his own eighteen-foot raft down the canyon’s notorious Colorado River rapids. He is an avid outdoorsman and amateur archaeologist who enjoys rock climbing, skiing, backpacking, mountaineering, river rafting, and whitewater kayaking with his wife, an emergency physician, and their two sons. Graham’s book, Extreme Kids, won the National Outdoor Book Award. His five nonfiction books have been reviewed positively by many publications, including the New York Times. Graham lives in Durango, Colorado. Learn more about Scott Graham at ScottFranklinGraham.com.

“This riveting series debut showcases Graham’s love of nature and archeology, simultaneously interjecting some serious excitement. Graham is to be commended for weaving together several cultures into one story. Recommend to readers who enjoy Tony Hillerman, Nevada Barr, and C.J. Box’s Joe Pickett series.”
— LIBRARY JOURNAL

“A gripping tale of kidnapping and murder…in a style similar to mysteries by Tony Hillerman.”
—ALBUQUERQUE JOURNAL

“Graham has created a story [of] richness and depth…Graham’s comfort and familiarity with his subject make the story an enjoyable read.”
—DURANGO HERALD

“A riveting mystery…Graham takes readers intimately into the setting, his knowledge of the places he writes about apparent at every turn.”
—DURANGO TELEGRAPH

“Canyon Sacrifice is a terrific debut novel by National Outdoor Book Award winner Scott Graham. Along with archaeologist Chuck Bender, we experience the evocative wonder and amoral beauty of the Grand Canyon while at the same time learning the inside — and often frustrating — workings of a contemporary national park. The omnipresence of the ancient Anasazi civilization enriches the atmosphere.”
— C.J. BOX, New York Times bestselling author of Stone Cold  and Breaking Point

“The real star of this engrossing mystery novel is the Grand Canyon itself. Scott Graham clearly knows the territory. In addition to some fine plot twists guaranteed to keep you guessing to the end, Graham delivers a glorious portrait of one of the most compelling landscapes on earth, a place that can kill just as easily as it thrills. This is a topnotch read.”
— WILLIAM KENT KRUEGER, New York Times bestselling author of Tamarack County

“One of the most engaging mysteries I’ve read in a long while! In archaeologist Chuck Bender, Scott Graham has created a flawed, all-too-human and memorable investigator who had me rooting for him to the end. The setting is magnificent and fascinating—nothing less than the Grand Canyon with its centuries-old secrets. The plot is fast-paced and filled with suspense. Canyon Sacrifice delivers it all and then some.”
— MARGARET COEL, New York Times bestselling author of Killing Custer

“The Anasazi died out long ago. But they come alive again in Scott Graham’s riveting novel, Canyon Sacrifice. You’ll teeter over the edge of cliffs as you walk the narrow passages these ancient people walked. And just when you feel you’ve solved the mystery of the kidnapping and the homicides, Graham throws you another curve, logical and making you slap your forehead that you missed the cleverly planted clues. Bring an extra-large bowl of popcorn while you read Sacrifice in one sitting.”
— C.M. WENDELBOE, author of Death on the Greasy Grass

“In this gripping, imaginative mystery set in Grand Canyon National Park, ancient Anasazi culture collides with the modern world in the most unexpected of ways. Like Tony Hillerman, Scott Graham uses his deep knowledge of the region to fashion a thrilling, compulsively readable story.”
— FRANK HUYLER, author of The Blood of Strangers

“As unpredictable and twisty as a switchback trail plummeting into its depths, Graham’s thriller sucks you into the mysteries of the canyon and the story of an unsuspecting family whose lives will never be the same.”
— TED BOTHA, author of The Girl With the Crooked Nose

“Graham deftly weaves a first-rate mystery through the caves and canyons and winding roads of the Grand Canyon. If you’ve been, you’ll immediately be drawn into the story. If you’ve never been, this may be your motivation to buy the ticket! I can’t wait to read which national park he tackles next!”
— TRICIA FIELDS, Hillerman Prize-winning author of Scratchgravel Road

“Rooted in the southwest in both geography and culture, Canyon Sacrifice will hook you early and keep you intrigued to the last page. You’ll meet archaeologist and investigator Chuck Bender. You’ll laugh with him and at him while you get drawn into the mystery he seeks to solve. Stunning setting, intriguing plot and likeable characters make this debut novel a bookseller’s dream.”
— ANDREA AVANTAGGIO, owner of Maria’s Bookshop