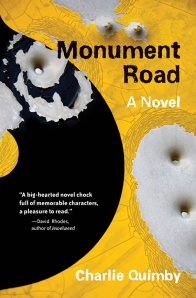 Leonard Self has spent a year unwinding his ranch, paying down debts and fending off the darkening. Just one commitment left: taking his wife’s ashes to her favorite overlook, where he plans to step off the cliff with her. Memories and encounters along the familiar road seem like obstacles—or they may be signs it’s not his final drive after all.

CHARLIE QUIMBY is a fourth-generation Coloradan who spent most of his career in Minnesota after studying at Carleton College. Following an early stint as a bookseller and historical playwright, he wrote for the Minneapolis Star, Honeywell and then his own company, where he was an award-winning writer, annual report creative and marketing strategist. He is a co-author of Planning to Stay, a guide for how to assess your community and take control of its development. Since 2004, he’s blogged about culture and politics at Across the Great Divide and splits time between his two home states, where he writes fiction and volunteers with the homeless. He can be found online at charliequimby.com and in the real world near his wife, his son or his bicycle.

“Two powerful subplots—a teenage girl seeking her inner Joan of Arc, an abused boy giving up on himself—rear up seemingly from nowhere. But trust Quimby. He merges them masterfully by book’s end. His love of character and the West is evident in every essential detail. Part modern western, part mystery, this first novel will appeal to fans of Louise Erdrich and Kent Haruf. Quimby’s prose reads so true, it breaks the heart.”
— BOOKLIST, starred review

“Monument Road is so rich with landscape, character and event that such a small telling cannot begin to do it justice. Read this exquisite story; it is a joy and a wonder and a tour de force of authorship.”
— SHELF AWARENESS

“The Colorado setting and the author’s simple style of prose perfectly complement the complexity of the human spirit in this superb debut.”
— PUBLISHERS WEEKLY

“Quimby’s storytelling, his humane impulses and his lyrical passages on the meaning of love and time, and on the history, geology and botany of the region, will surely impress readers.”
— MINNEAPOLIS STAR TRIBUNE

“Our hero journeys through western Colorado on a mission to scatter his wife’s ashes, crossing paths with other journeyers in a search for redemption and meaning.”
— THE DENVER POST

“Not to be overlooked is the love, humor and friendship among pain and loss, which makes it a book far more about the richness of life than the finality of death.”
— GRAND JUNCTION DAILY SENTINEL

“[A] book of confessions and connections, fear, forgiveness and, ultimately, the stirrings of redemption.”
—HIGH COUNTRY NEWS

“While not exactly a happy novel, Monument Road is beautiful and real, full of landscape imagery of the American Southwest as a poignant and sometimes haunting metaphor of our connections to the land.”
—15 BYTES

“Quimby’s writing is sensitive and graceful; he has a talent for revealing slowly blossoming characters who are beautifully flawed and realistic.”
— DESERET NEWS

“Though the many characters and storylines can occasionally be difficult for a reader to follow, the end result is a story that accurately represents the beautifully tangled, complicated thing that is a human life. This well-written, award-winning book astutely addresses the changing face of western living, particularly on Colorado’s Western Slope.”
—COLORADO COUNTRY LIFE

“In prose that might have been chiseled from the magnificent landscape he describes, Charlie Quimby has written a great big American Novel. Full of pathos and humor and sadness, you won’t reach the end of this book without feeling fuller and wiser. What a gift Charlie has given us.”
— PETER GEYE, author of The Lighthouse Road

“Charlie Quimby’s Monument Road is a fine novel about the New West but also just a plain fine novel. In Quimby’s elegant prose, the character of Leonard Self emerges as endearing and maddening both, and around him Quimby builds an entire community of full-blown and enigmatic and always-original characters.  This is a novel with size and scope and generosity, with an acute understanding of human nature and a deep appreciation for the ways people face change and work out their lives in relation to each other.”
— KENT MEYERS, author of Twisted Tree and The Work of Wolves

“The landscape and characters of Monument Road ring true. Charlie Quimby has created a story that is hard to forget. His attention to the details of a fading life and life style are spot on and will be a window to any reader’s understanding of the central phenomenon of the New West.”
— DAN O’BRIEN, author of Stolen Horses

“Monument Road is a legitimate modern western, complete with an impressively authentic and aging rancher, heartache, ghosts, low-lifes, a rural landscape undergoing radical transformation, a glut of evangelical churches, and the ancient, powerful cliffs and mesas that surround it all, in southwestern Colorado. The narrative is likewise unpredictable and wild! A pleasure to read.”
— BONNIE NADZAM, author of Lamb

“Monument Road will take you on a rewarding climb into the hearts and souls of real people searching for peace and understanding in an unforgiving landscape.  This novel is ambitious in scope and as sweeping as the broad skies of Western Colorado, but delivers on all fronts. Fans of Kent Haruf, Ron Carlson, or Wallace Stegner will find a lot to like.”
— MARK STEVENS, author of Buried by the Roan

What Independent Booksellers are saying about Monument Road:

“What a gorgeous novel this is – the kind that seems straightforward yet reverberates with layers of meaning. Scenes unfold as if a sudden guest appears at the door then later one discovers every guest has a purpose. The landscape of Monument Road is both beautiful and fraught with danger; so too are the risks one must take in a journey towards what has heart and meaning.”
— Sheryl Cotleur, Copperfield’s Books, Sebastopol, CA

“Leonard  Self will stay with you for a  long time after you finish this novel. It’s the best book I’ve read in a very long time!”
— Anne Holman, The King’s English Bookshop, Salt Lake City, UT

“With grit, grace and a full range of emotions, Monument Road’s characters take dead aim at challenges to the Code of the West.  Readers of Brady Udall and Louise Erdrich will appreciate the subtleties of language shaped by the landscape.”
— Margie Wilson, Grand Valley Books, Grand Junction, CO

“Charlie Quimby gets inside his character’s heads better than any writer I’ve come across in a long time.  The voices in this book ring so true to life you can feel their pain, their laughter, and their longing.”
— Aaron Curtis, Books & Books, Coral Gables, FL