“Hepner’s stunning debut novel is an homage to the barren landscape of the American West…a meditation on the nature of hope and self-determination, a sweeping elegy to a dying town and to the bond between blood and earth.” —PUBLISHERS WEEKLY (starred review) 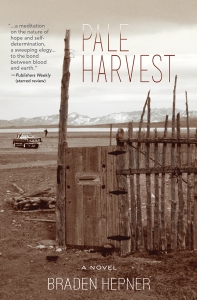 Working a dying trade in a dead town, dairy farmer Jack Selvedge finds his life and existence stagnant. When Rebekah Rainsford moves back to town on the run from her father, her dark history consumes him. It soon becomes clear why girls like her don’t stay in towns like these, as elements of humanity in ruin culminate in tragedy. A deeply written and deeply felt story of love, depravity, and shattered ideals, Pale Harvest examines the loss of beauty, purity, and simplicity within the mindset of the rural American West. 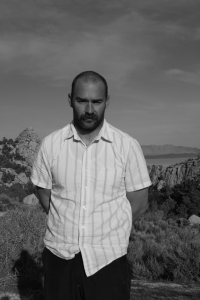 BRADEN HEPNER graduated from the Iowa Writers’ Workshop in 2009 and now lives in Idaho with his wife and son. This is his first novel.
BradenHepner.com

“[A]n unforgettable literary blast….Hepner’s characters are among the most compelling to be experienced in contemporary fiction….readers will be moved by the author’s poetic rendition of the land’s unique topography that inflames, confounds, and rarely satisfies one’s personal hunger for carving out a meaningful and happy life.
—Les Roka, THE UTAH REVIEW

“Pale Harvest is a dark novel by a deft storyteller.”
—HIGH COUNTRY NEWS

“Hepner has put in the daily work with this fine novel, its keen words and sentences furrowed like lines eye-measured and trued on a far dying tree in the distance across the alkaline fields of northern Utah.”
—15 BYTES

“…a deeply moving and intellectually profound novel built on the iconic myth of the American West. Think McMurtry’s The Last Picture Show or Horseman, Pass By…Hepner draws a narrative exploring the existential angst smoldering in the rural West as family farmers who hold stewardship of the land confront social and economic conditions beyond their control. A bravura debut.”
—KIRKUS REVIEWS (starred review)

“Set in a rugged scrap of Utah, this first novel rings with the hard-scrabble tones of Steinbeck…Pale Harvest is lush with unusual vocabulary and microscopic detail that combine to evoke a land and a kind of life singular to the American West…One of the most important characters is the landscape: between a river that takes lives and a desert that hypnotizes, the setting is inextricably linked to Jack’s character…”
—Camille-Yvette Welsch for FOREWORD REVIEWS

“A quietly dazzling debut that any reader could enjoy.”
—LIBRARY JOURNAL (starred review)

“Near the final pages of Braden Hepner’s extraordinary debut novel, the narrator talks about a community’s ‘wishes and budgets’—a calm yet penetrating phrase that perfectly captures what so moved and excited me about this novel. Hepner’s starkly poetic voice leads us into the lives of characters torn between the imagined glories of the infinite and the raw realities of hard labor here on earth. Pale Harvest is an unforgettable addition to the ever more various stew of American literature.”
—SCOTT SPENCER, author of Man in the Woods, A Ship Made of Paper, and Endless Love

“Pale Harvest is a novel about real people in the deep and complex throes of their charged lives. Hepner is a master storyteller, a craftsman of the first order, and a fine new talent. His Western Realism is a refreshing jolt, a throwback to Steinbeck and Stegner with its own stamp of uniqueness.” —ANTHONY SWOFFORD, author of Jarhead, Exit A, and Hotels, Hospitals, and Jails

“Pale Harvest‘s dark brooding portrayal of the rural west mixed with searing honesty and brutal life on a dead-end dairy farm left me sleepless.  Brilliant in its emotions and character development.” —ANDY NETTELL, Back of Beyond Books, Moab, UT